What is 3D Laser Scanning

For over 100 years, images of Fort Conger have been captured using pen and ink, photographic film, and most recently - laser beams!
Laser scanners emit a pulse or laser beam of light that strikes the surface of an object, such as an artifact or building. The instrument then measures the beam’s “time of flight”, recording the time it takes for the beam to strike a surface and make its return. With two mirrors, the scanner calculates the beam’s horizontal and vertical angles, giving accurate x, y and z coordinates. This is done millions of times, creating a dense three-dimensional cloud of points in a coordinate system that forms the shape of the objects being scanned. The resulting point clouds provide highly accurate baseline information that can be used to reconstruct and repair historic structures, as well as monitor site degeneration through time. Laser scanning provides a method of rapidly and accurately recording an entire site.
Laser scanners are typically grouped by technology and range. Short-range scanners are generally used to scan distances less than 5 metres, medium-range from 5 to 300 metres, and long-range scanners are capable of measurements greater than 300 metres.

The use of 3D laser scanning is emerging as an effective method for rapidly and accurately recording cultural features at archaeological sites. Using 3D laser scanning in remote areas with harsh environments can be extremely challenging. Scanning equipment is sensitive to extremes in temperature and humidity, and sometimes can be violently jostled during transport to field sites. Operationally, there are many challenges to overcome, such as battery charging, sensitivity to lighting, dust, and wind. 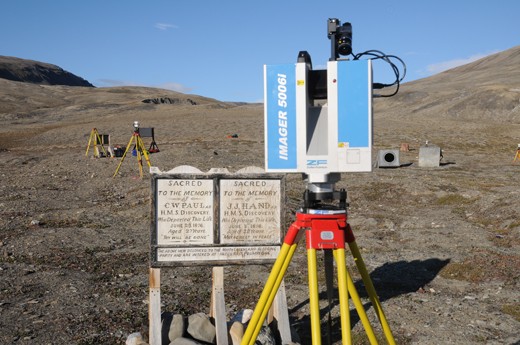 Wind speeds, for example, can create havoc with sensitive instruments by stirring up particles of dust and grit. In extreme cases, windblown particles and even clouds of insects can create scanner noise as the laser picks them up. High winds require that scanners be operated on fixed and stable platforms to minimize vibration of the instrument during recording.

Excessively bright light levels, caused by extended periods of daylight at high latitudes, as well as reflectivity of snow, ice, and bleached wood/timber, also create problems for time of flight scanners which are especially sensitive to light.

To reduce ambient light levels, scanners in this category need to be enclosed within a tent, shielded by a tarp, or operated at night.

Operating in the rain is not advised or recommended for any scanner, which is again problematic for laser scanning in arctic regions, where rain, snow, and persistent fog are common during summertime.

Consequently, being self-sufficient in the field may require the transport of several hundred pounds of equipment, easily exceeding the normal cargo allowance for northern commercial airlines.

All of these challenges aside, laser scanning seemed the ideal tool to document Fort Conger. Over a period of 12 days during the month of July, 2010, a small but dedicated team traveled to Fort Conger and scanned total area of 34,500 m2.

This required setting up the laser scanner at 43 different locations, with the resulting 3D point clouds capturing all of the cultural features present at the site. It should be noted that only 11% of the detail captured during the scanning process was used. This was necessary to facilitate the manipulation of the datasets using desktop and laptop PC computers. Even at 11%, the scans revealed such details as the staining caused by nails on the wallboards of the Peary huts.

Point Clouds as Tools for Preservation

One of the advantages of laser scanning is that the point clouds can be used to support existing on-site conservation efforts at Fort Conger. Using Leica Geosystems Truview, a web-enabled panoramic point cloud viewer, accurate measurements of various cultural features can be obtained. By way of illustration, wallboards that had detached from one of Peary’s huts, either because of weathering or polar bear activity, were reattached in 2010 with metal screws to maintain the structural integrity of the huts. Should it be determined that other missing wall boards pose similar threats, conservators using measurements of damaged areas obtained from the point cloud data could fabricate replacement boards in advance of any future trip. Restoration carpentry work could then be rapidly carried out at the site. 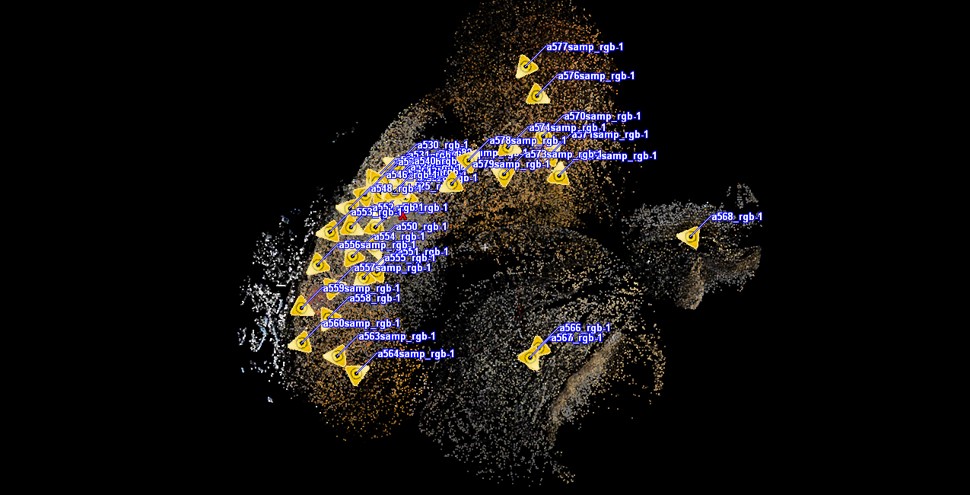 A Birdseye view of the point cloud of Fort Conger, with yellow triangles indicating scanner locations. Note that the scanner even picked up sea ice (lower right side of image).

In much the same way, the laser scanning data from Fort Conger can be used to monitor the effects of soft rot fungi, wind ablation and salt attack on wooden structures at the site. For example, laser scanning has recently been used to examine the effects of different storage environments on the morphology of wet-preserved wooden objects from archaeological sites. As mentioned previously, historic polar buildings often contain discrete microclimates that can influence where deterioration occurs. While exposed to similar agents of biodegeneration, the interior and exterior surfaces of Peary’s huts at Fort Conger seem to have been affected in different ways. Ice, snow and water accumulating in each hut’s interior according to the season foster moss growth in warmer temperatures. In contrast, the exterior surfaces of many boards have a grooved appearance due to wind ablation, which is often missing from interior surfaces. As both the interior and exterior areas of the huts were scanned, the resulting data may prove useful in determining how and why different areas inside and outside the huts degenerate.

The laser scanning data can also be used to supplement earlier measured drawings and photographs of Fort Conger, which have been used to monitor the site. Many of these photographs contain general and specific views of the Peary huts and surface artifacts. Researchers visiting Fort Conger since 1990 have photographically replicated these views. The large number of scan sites (called scanworlds) allows us to reproduce the field of views captured during these earlier photographic monitoring protocols. Scanworlds can even be used to replicate the views of historic photographs taken by the Lady Franklin Bay and Peary expeditions and Godfred Hanson’s 1919 expedition to lay caches for Roald Amundsen. Perhaps most importantly, the panoramic views of the site captured in each of the 43 scanworlds dramatically increase the extent of visual coverage for future monitoring of changes to the site.

In addition to supporting conservation management of the site, the point cloud data has also been used to create photorealistic models of structures and artifacts. Ultimately this website will host the images, movies and virtual worlds generated from this project. This virtual heritage environment will be used to educate the public about the significance of Fort Conger, and the roles played by various expeditions in advancing polar science.

An animation that rotates 360 degrees showing what remains of the Lady Franklin Bay expedition house. The foundation is rectangular in shape, and contains the remains of walls, floors, stoves, etc.

An animation walk through that takes you from the outside to the inside of Matthew Henson's hut at Fort Conger. The interior contains the remains of a large iron stove, as well as wooden boxes.

An animation that rotates 360 degrees showing one of the three Peary huts.

An animation that rotates 360 degrees showing all three Peary huts. The rectangular huts all face one another and are constructed of wood that now appears weathered.

An animation showing a plate from a cast iron stove. The plate is round and has a raised flower-like design in the center, and is dark red in color.

A short video showing artist Cory Trepanier sketching Fort Conger. Trepanier is seated near the site and is using a small easel, and is working fast to avoid the incoming tide.